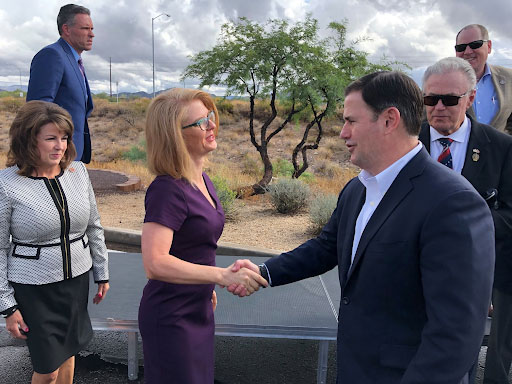 My number one responsibility as a legislator is to support policies that strengthen the Arizona economy. Allowing job creators and innovators to thrive, upgrading our infrastructure, developing a highly educated workforce and providing abundant opportunity allows the state to make critical investments in our future growth and prosperity. It also enables us to implement a basic level of services for our most vulnerable populations. Last week, I had the opportunity to be in the front row cheering on Arizona’s economy.

Governor Ducey announced the improvements planned for the I-17. Slated to begin in 2021, the expansion project will widen the I-17 to three lanes for 23 miles and construct a new flex lane that will flow with the busiest direction of traffic. The Legislature approved $130 million which will be combined with local, state and federal dollars for a $300 million total investment. When completed in 2023, the infrastructure improvements will decrease congestion, improve safety and be a big benefit for the state and regional economies.

Creighton University broke ground on a four-year medical school in Phoenix that will train the doctors, nurses and healthcare professionals of tomorrow. The Virginia Piper Charitable Trust provided a $10 million grant to the university for the new Arizona campus which will create an overall investment of $100 million in the economy. The approximately 200,000 square foot project is anticipated to be home to 900 medical students by the time they reach capacity. Besides bringing good-paying jobs, Creighton University will graduate hundreds of medical students helping to reduce the doctor shortage in Arizona – which was a priority of mine last session!

Arizona’s economy is humming. I will continue to be an advocate for its long-term health.