However, that won’t deter a radical, special-interest group from spending untold sums of money trying to tell you otherwise. They set an arbitrary purity test that doesn’t permit dissent, and disregards the United States Constitution.

Here is the truth. Abortion rates in the U.S. are at their lowest rates since Roe v. Wade. Americans United for Life consistently ranks Arizona in the Top 5 pro-life states including #1 twice in the past three years (which CAP even boasted on their website). Finally, there are more than 50 pro-life service groups in Arizona according to the Arizona Life Coalition.

My voting record has directly contributed to Arizona’s national standing on pro-life issues. The rankings don’t even account for the multiple bills I introduced aimed at expanding healthcare options for expectant mothers so they can deliver healthy babies. Ironically, my opponent has killed many of the bills I’ve introduced to protect pregnant mothers.

Below are all the “yes” votes I’ve cast on pro-life legislation. My opponent has obediently voted for multiple pieces of legislation that were ruled unconstitutional and cost taxpayers hundreds of thousands of dollars to defend. This line of attack is just more desperation. 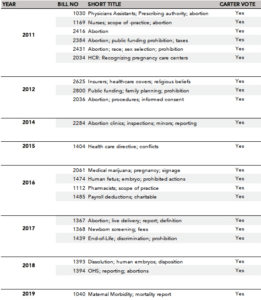